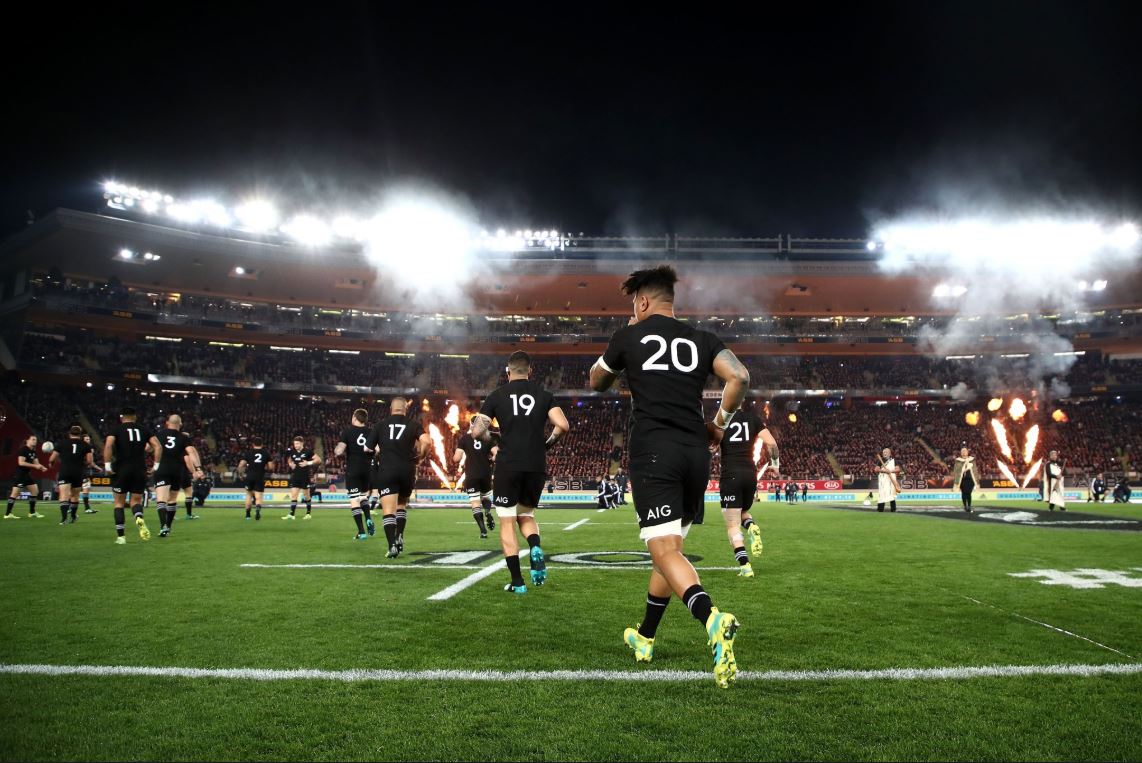 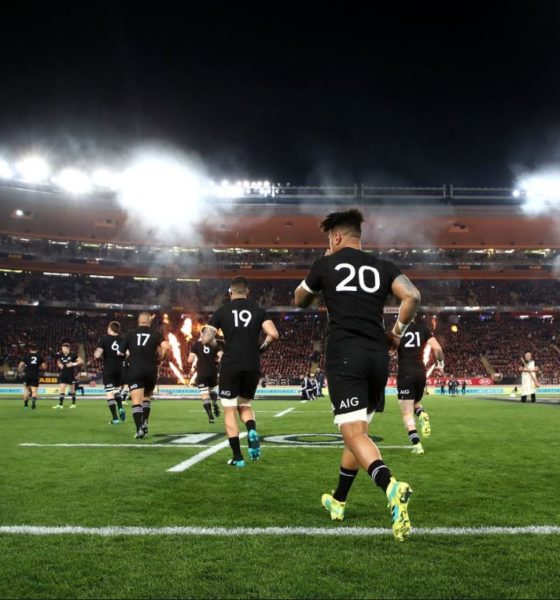 Who has never dreamed to see its national rugby team play against the All Blacks in New Zealand?

Who has never dreamed to see its national rugby team play against the All Blacks at the Eden Park, in New Zealand? It’s here, down under, that I had the chance to live this once in a life-time experience!

Hard to say that the French have the statistics on their side. The World Champions and France have a rivalry which extends back to 1906. They have played 58 times, with the All Blacks winning 45 times and the French only 12. And it has been 24 years that France did not beat them on their own turf…

Moreover, last time France came to play here 5 years ago, they lost their three games. I hope we can have a chance for revenge this time! 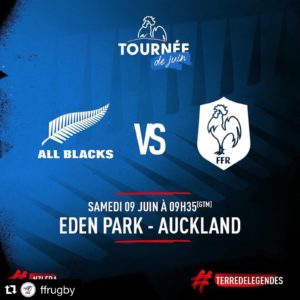 All Blacks playing France at the Eden Park

A more than expected game by the Kiwis

It’s been a few weeks now that the locals are very passionate about this game. We were said that the French team is particularly respected and liked here by the rugby fans. We saw a lot of billboards and advertising on the streets. Many bars were broadcasting old games opposing the Men in Black and the French for a month now! Such a great atmosphere. I havn’t expected less from a country where the All Blacks is a religion!

We had more than a month to wait before this specific game! We filled time visiting the Rugby Museum in the middle of New Zealand.

Social medias also looked forward this exciting event! This game was an historic moment for the All Blacks: the well-known Beauden, Scott and Jordie Barrett are going to play this test match at Eden Park, the first time ever that three brothers are in a starting lineup!

On the other side, the French media did not really advertise this game: concerned by other rugby events at the same time (Paris 7s, U20 World Cup) and endured the time difference with a live game at 9:35am not easy to appeal…

Game day at the French Festival

It is no coincidence; the Auckland French Festival was organised this same weekend. What’s more thrilling than spending game day over there to get cheered up for the game, meet other French fans, practice the national anthem “la Marseillaise” with dear wine, cheese and beers! 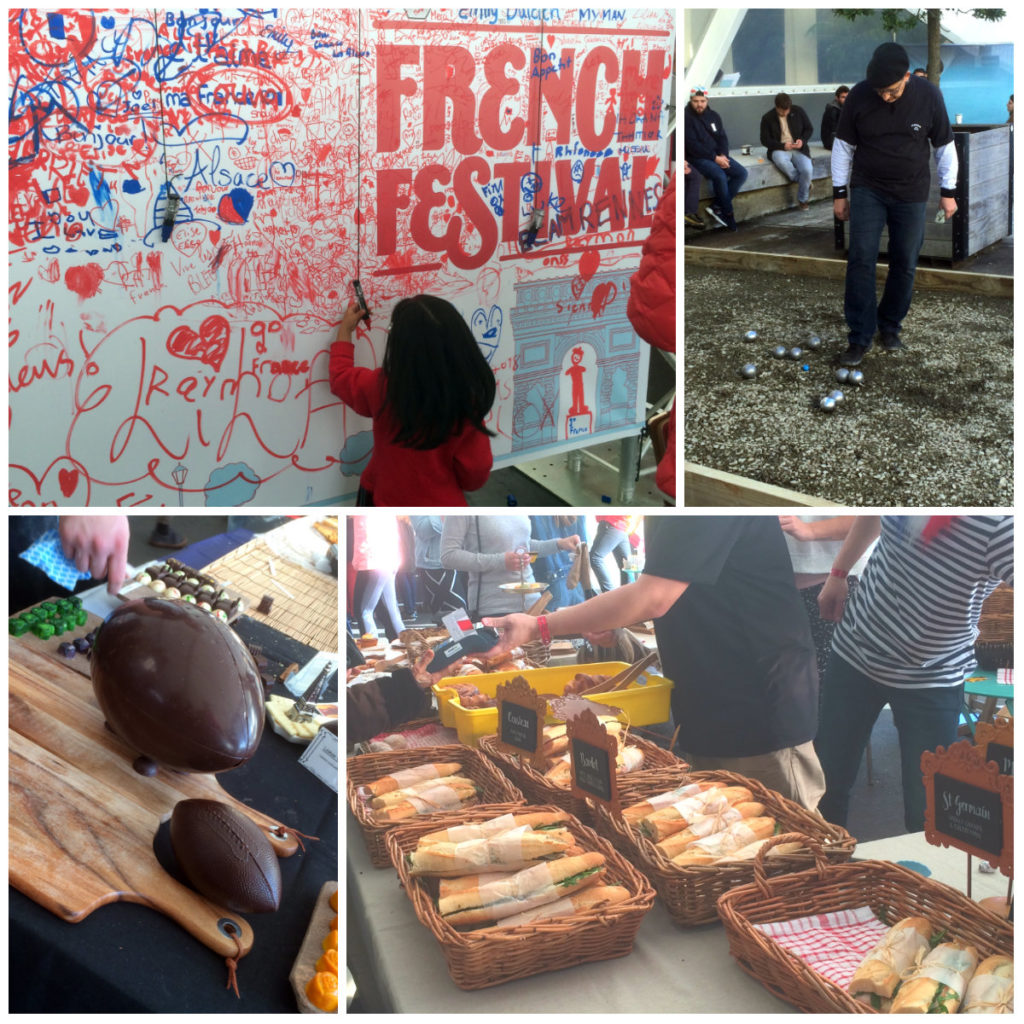 Pre-game afternoon at the French Festival

It was all a relaxed and cheerful atmosphere with petanque fields (typical French game), French food, home made music, croissants or champagne. Can you guess which of the stands was the most crowded? The Raclette one! If you don’t know this typical winter French dish yet, let me know and I’ll get you discover!

All the fans who couldn’t get a ticket for this sellout game were able to watch it here on huge screens at the “French Fan Zone”. As far as I am concerned, it’s time to get to the stadium…

This is not my first game at the Eden Park and I have to say that I enjoyed again the easy public transportation to reach the venue. 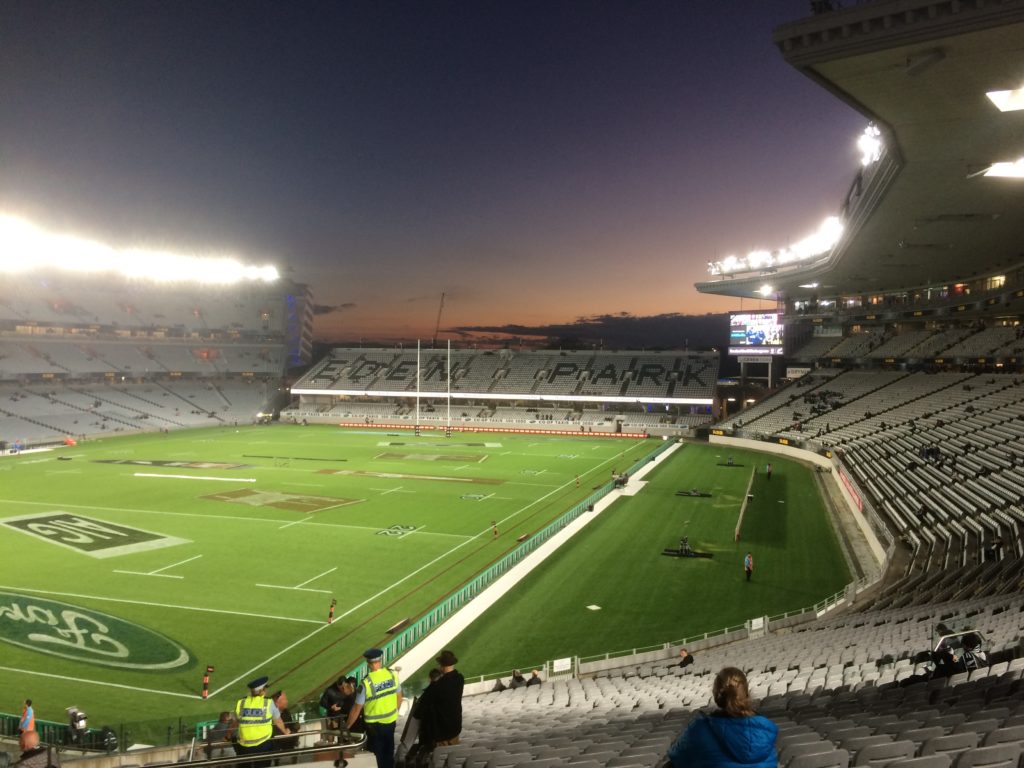 Even if we arrived there early, we could already feel the festive atmosphere rising around the stadium. It is such a great pleasure to see that so many French fans made it so far, even here, at the end of the world.

We used this time to walk around the venue, looking for any animation or activity we could do in the remaining 2h30 before kick-off.

A long time to kill before kick-off

We met as expected the loyal volunteer team, devoted to help any fan to get to their seat. Several All Blacks’ flags and merchandising sellers were wandering the corridors to rescue non-dressed up fans. 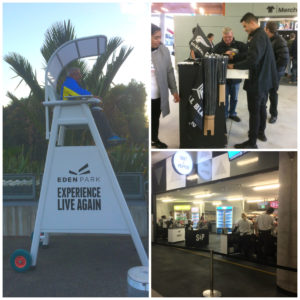 Many food trucks had an extensive and tasty range of menus for starving fans: Mexican food, kebabs, barbecue, burgers, fish and chips and even some bio and gluten free options.

However, no signs of any initiative from the stadium to entertain fans before the game. Why not waiting in the “old fashioned way”: chat with other fans, take pictures and selfies, sing songs together, have a beer and vote for the best dress up!

This way we had the chance to meet Olivier alias Baroud4Sport traveling around the world to attend sport events. You can find his Fan Story here.

We also loved this initiative launched by some great French fans to deal with this lack of fan services. They created a home-made free painting Bleu-Blanc-Rouge stand for those fans who forget about their costumes. What a success and what a great solidarity!! 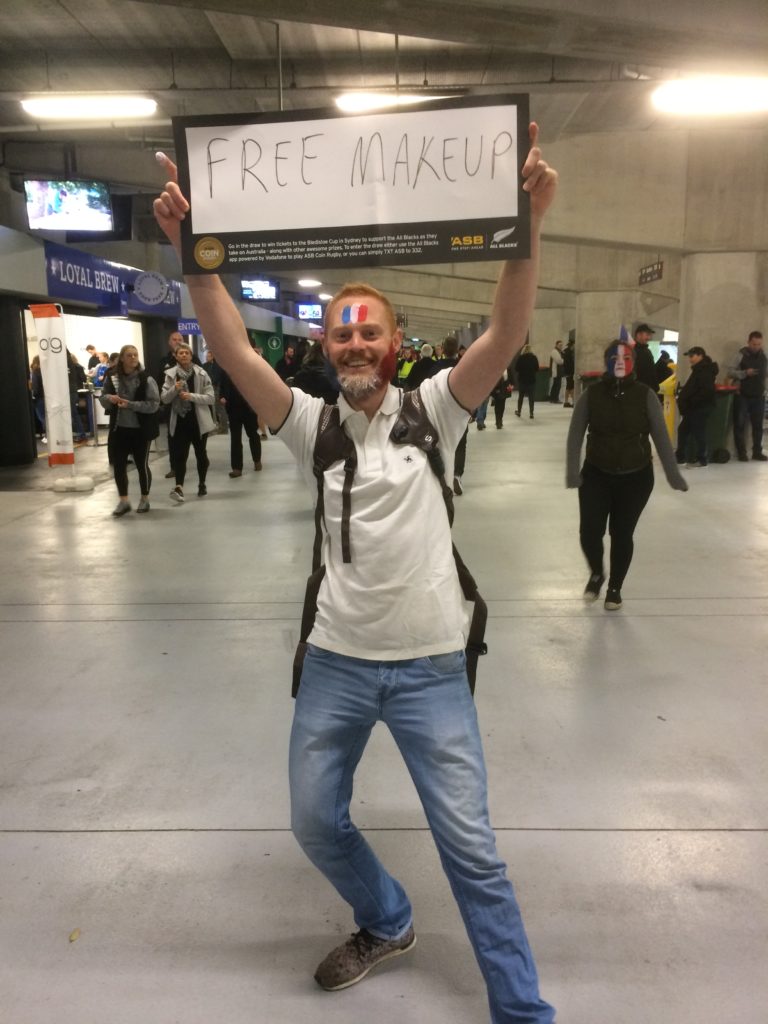 The All Blacks fans were also well dressed up. 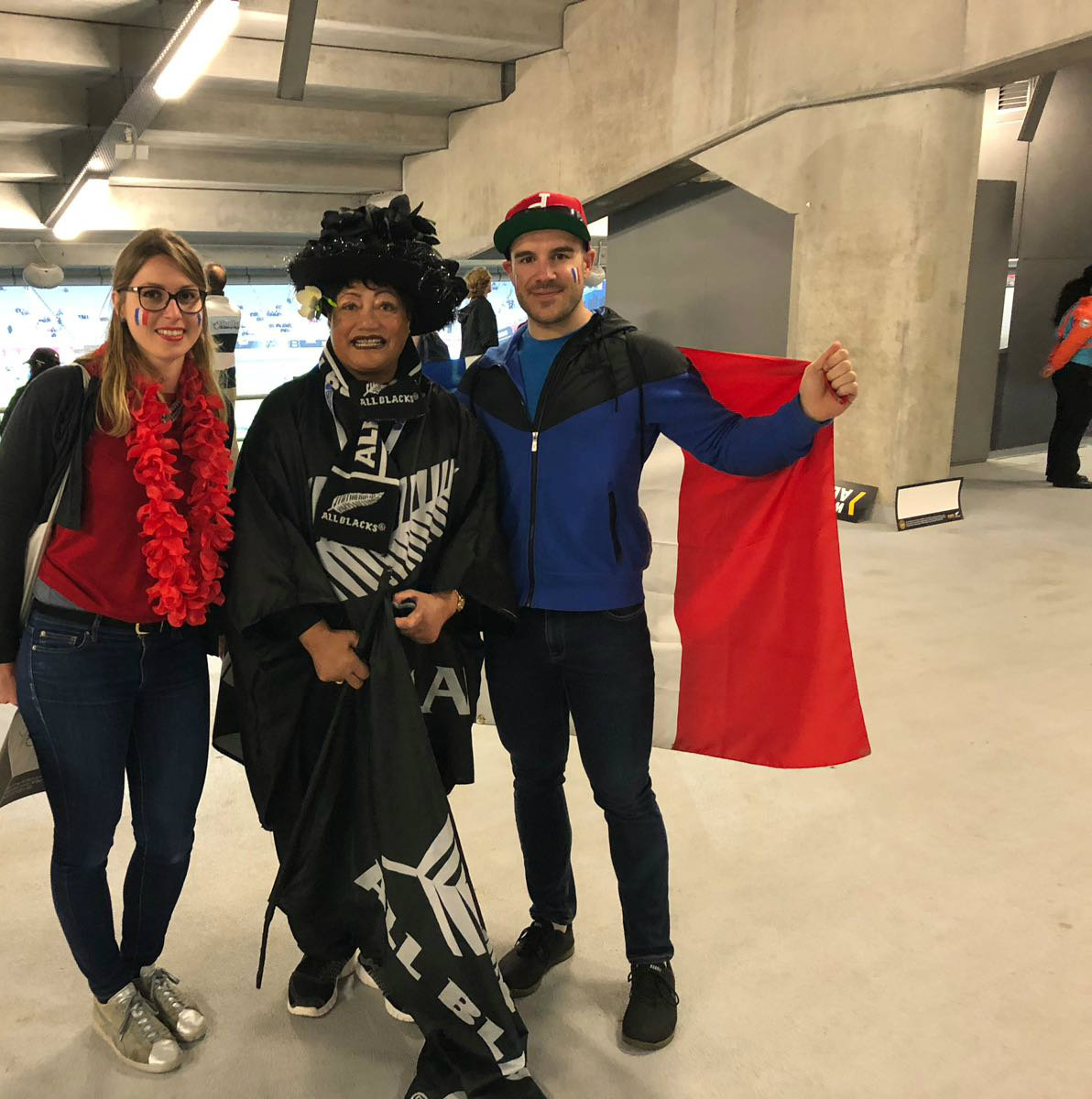 Meeting with All Blacks fans just before kick-off

A couple of minutes remaining

The last minutes were well handled by the organization. A speaker in the stands – supported by the giant screens – was presenting the features of the game: the number of times the All Blacks kicked our ass, the stakes of this game, an interview of the great but injured Kieran Read, the World Cup being exhibited on the field and finally the players presentation. The tension was at its utmost, we were just waiting for the rugby men to get on the turf!

”Singing – or more exactly shouting to the point of losing my voice – the Marseillaise, barely alone in our section in front of this crowded Eden Park, is one of my strongest memory of this game.” 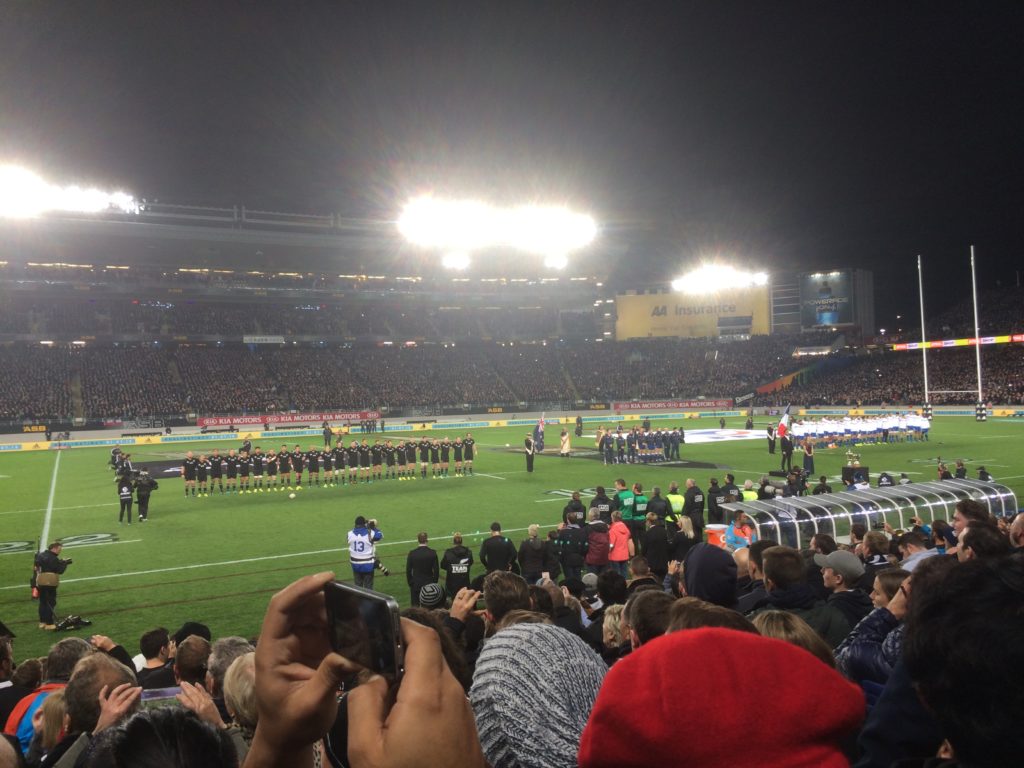 Let’s hear «Aotearoa » and « God defend New Zealand ». The 43,000 kiwis would rise and sing their anthems in unison. The Men in Black packed against each other proudly showed that they were going to play their heart and soul out for their country. We even saw some of the rookies crying during the song.

It was a strong moment, but not as expected as what was coming next: the famous Haka! And it is the classical but not less powerful Ka Mate that the All Blacks performed to welcome the French Team.

What a show! The stand up and silent crowd watched the 23 players. Those seizing 40 seconds – that seemed an eternity – gave us goosebumps. I can still remember the player’s hands hitting their thighs and this noise reaching the last rows of the stadium.

Huge flames gave the final signal: the tone has been set.

It was hard to make our songs heard as spread out French fans in the middle of this black mass. Too bad there was no « visitor stand » so we could all be together to foster our team. Regarding this condition, I was happily surprised to hear that loud the French songs and see that French guys launched a wave around the stadium. Compared to other fans, the Kiwis are kind of quiet, not crazy singing or shouting and do not really react to the game – even at litigious actions. They looked like a peaceful strength that made the game atmosphere surprisingly peaceful, except for tries!

Being the only French around in our section was actually not a problem and the All Blacks’ fans were very friendly, a bit amused but always looking to congratulate us during the good French plays. However, they were very confident from the beginning that they would win this game. 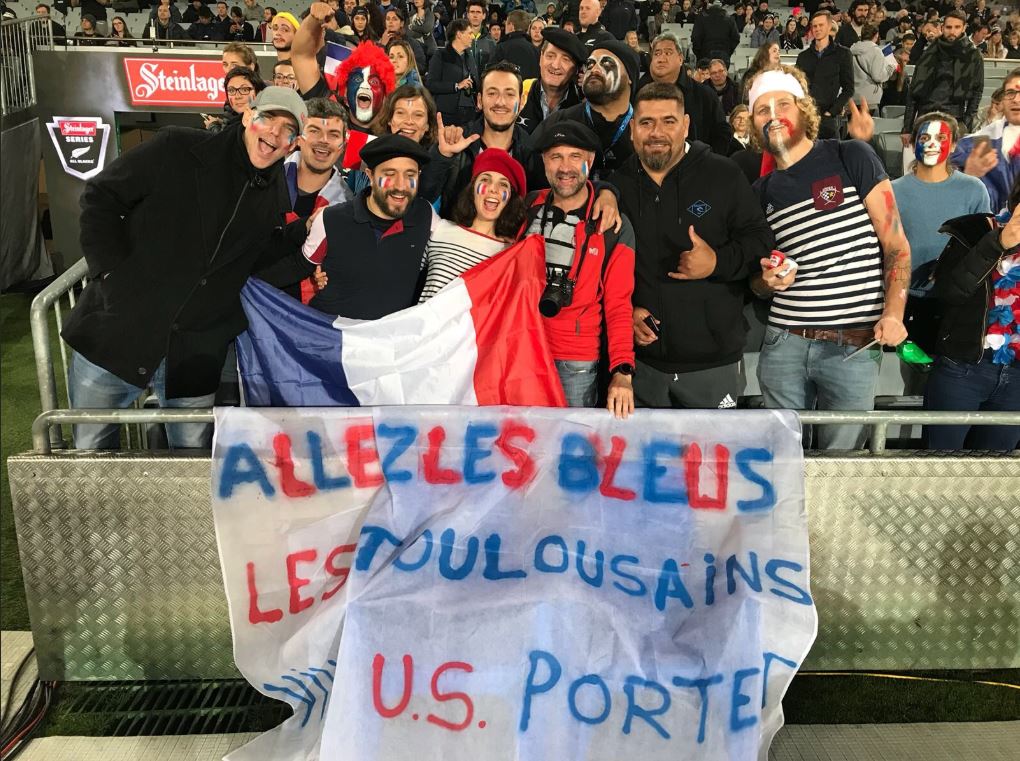 The French fans ready to sing

It is only 7 minutes after kick-off shot by Belleau that Grosso found a window from a ruck turnover and scored the first try. Unfortunately, Para did not convert it (0-5). Les Bleus were inspired and it is only at the 14′, after a penalty claimed by the referree and successfuly completed by Beauden Barrett that the All Blacks came to the score (3-5).

Again, Para realised a great three point after Smith was penalised twice over (3-8).

Right after, the three-way Barrett tornado hit the French defense hard for the first time. After passing through Crotty, Beauden finds the ball in the corner to conclude the move (8-8).

However, in this short remaining time, the All Blacks found easily the way through the goal line. Yet, this try was turned down by the referee beacause of an obstruction of Smith on Chat earlier in the move, and… whistle!

France kept the lead at the break. Defense was their key strengh. The All Blacks were maybe lacking precision during those 40′ and unluckily their kicker was not very successful either.

Enough to turn us overjoyed and let us hoping for a victory!

I used half-time for food and toilet break… like everyone else ! I talked about the cleanliness and the huge size of the bathrooms at the Eden Park during my last visit. However, it was not sufficient enough and I missed the 5 minutes of the second half-time. Inevitable issue, as always…

And then… we bit the dust

Only 8 minutes after the players came back on the turf that Barrett scored a penalty (11-11).

Right after, Gabrillague was yellow-carded for a high tackle on Cotty and the French had to go down to 14 men. We can say that this mistake cost France the game.

Indeed, shortly after Paul left the field, the All Blacks scored three tries in a raw. Those points were built on precision and hard on attack. Barrett improved also its convertion rate. The result put beyond doubt (40-11).

Despite the attempts of the French staff to rotate some players, Les Bleus were overwhelmed and endured two tries from Ioane and Savea. The teams leave the pitch on the score of 52-11.

After this painful defeat, the French fans are expecting a reaction for their team for the second test match, a week later at the Westpac stadium in Wellington. 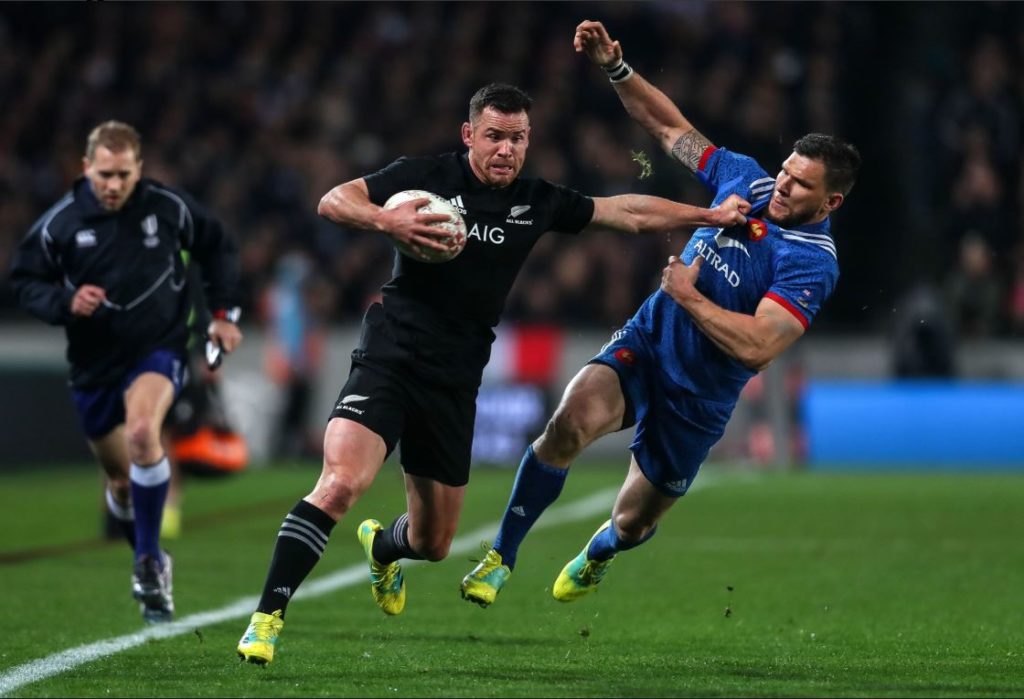 The All Blacks players and staff stayed a long moment on the field after the end of the game. Even if we were a bit sad about the outcome of the game we jumped on the occasion to be the perfect groupies. We had the chance to take some pictures with the players and chat with some of them who were even in the stands, among all their fans. That was amazing! 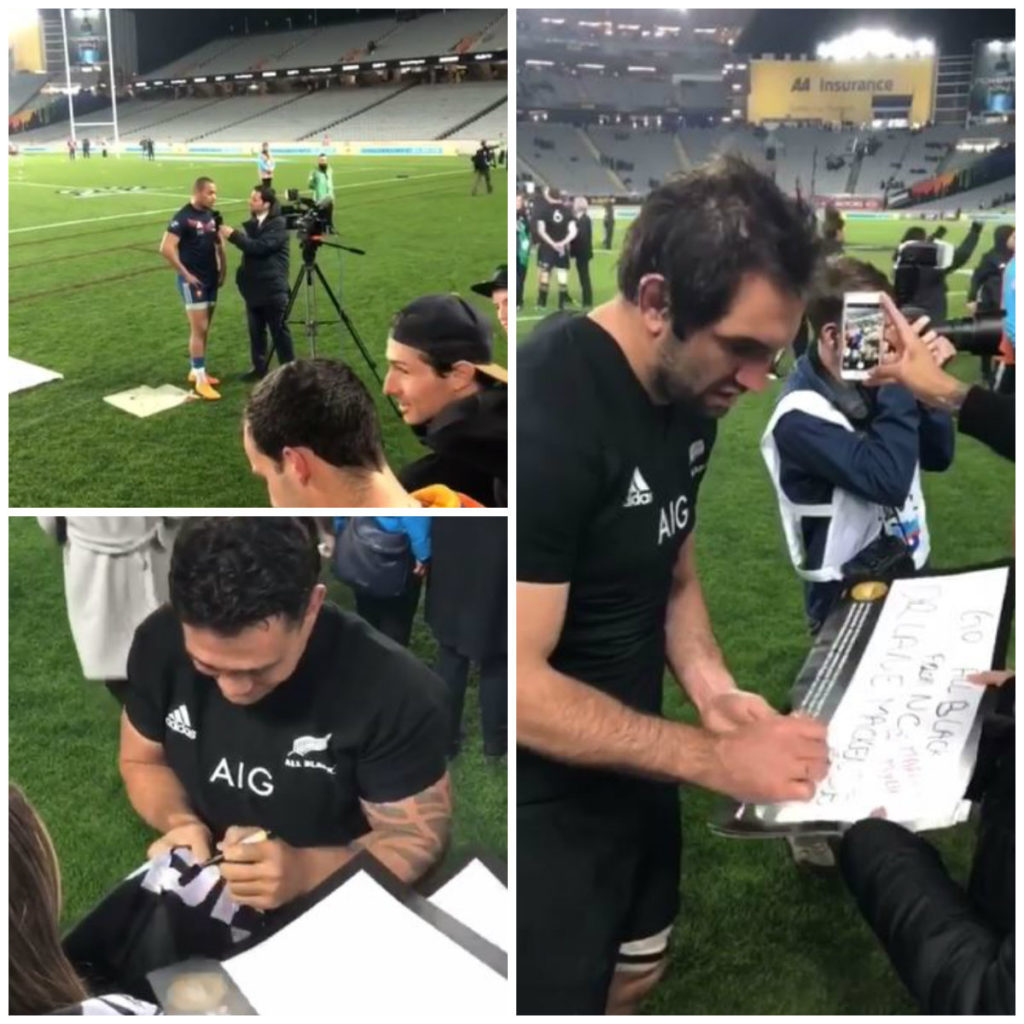 Players after the game spending time with the fans 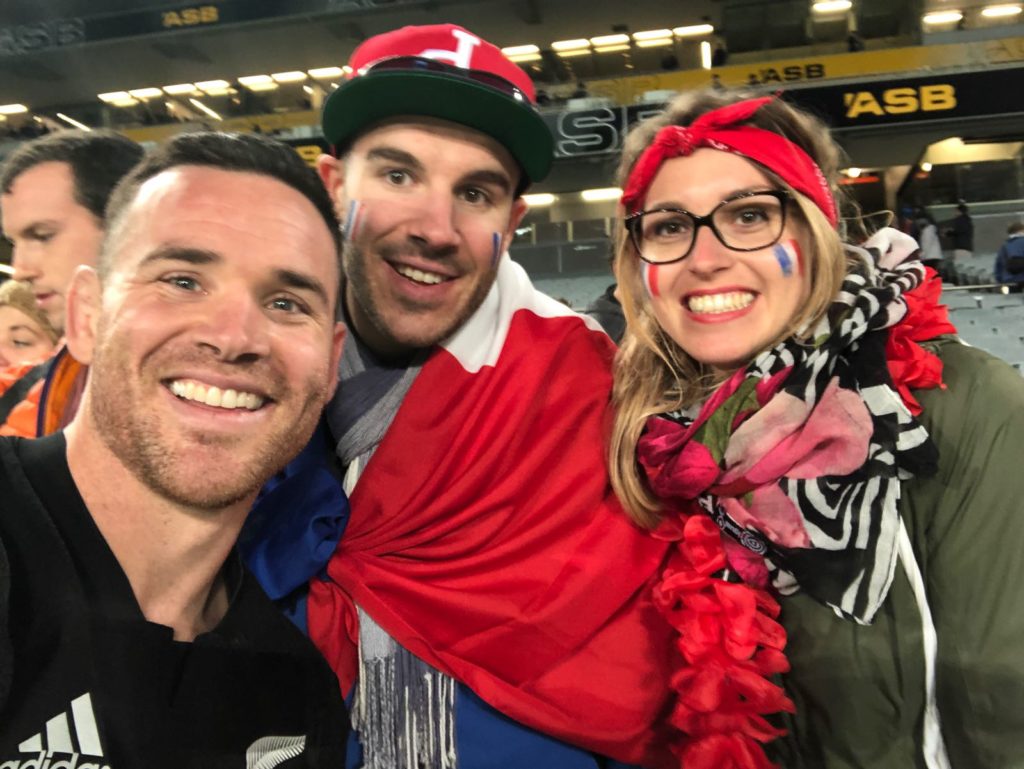 The best selfie with Ryan Crotty

“The world cup champions are not pretentious and don’t show off. It’s a real pleasure for the fans. It is unforgettable moments that we would have loved to share also with our French squad.”

Unfortunately, the French players might not have been in the mood to mingle with the crowd after such a defeat (very few stayed after to meet and greet the fans). It is too bad not to just thank the fans that travelled thousands of kilometres so support them.

We took the bus on our way back home (the dedicated transportation services of the stadium were once again really great) with stunning memories for a life time and sparkles in the eyes! In the end, it is really not the result of the game that makes the fan experience extraordinary.

We promised to come back a third time to the Eden park but this time to support the All Blacks! Yes, we also like to win anyway… 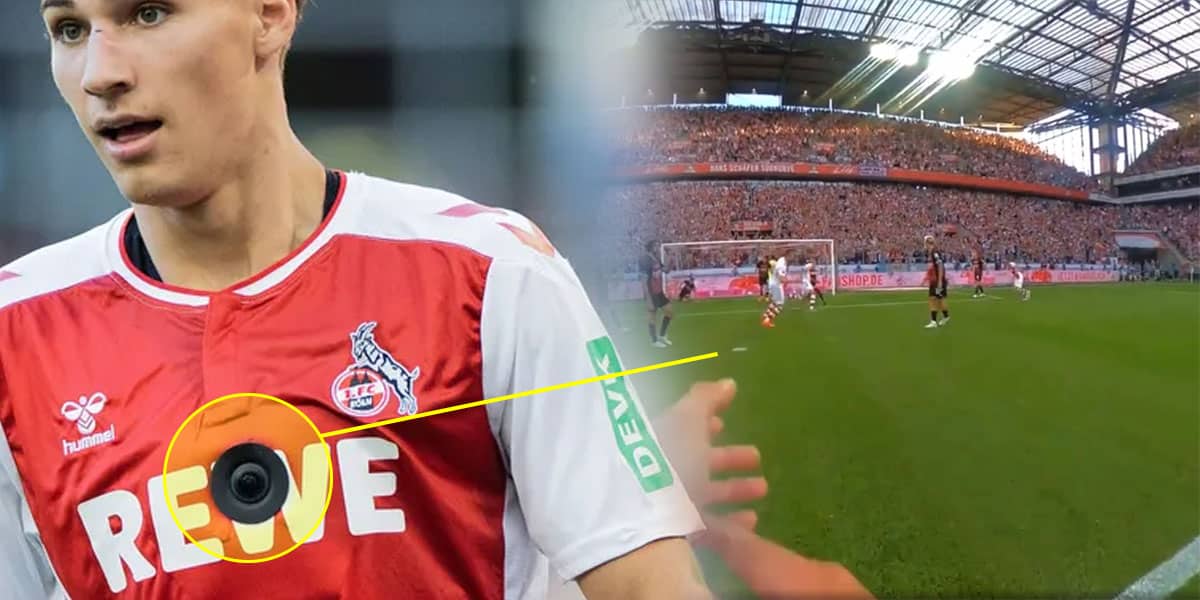 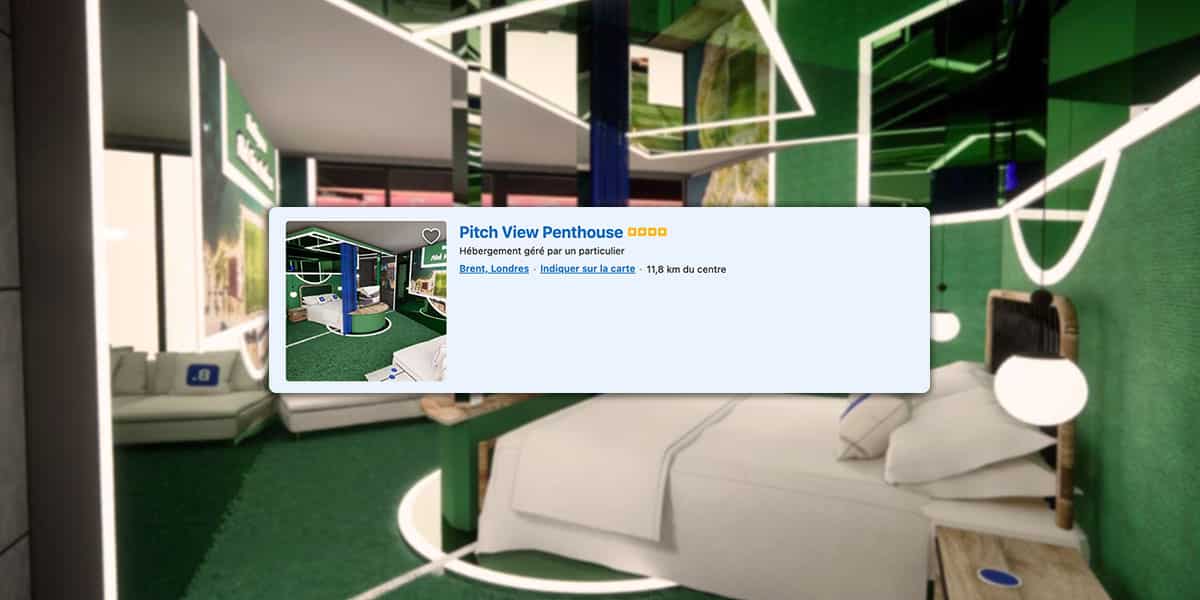